This year the Christmas Lights are are being switched on Saturday the 26th of Nov.

Santa will arrive at 3pm and you can meet him and get you’re photo taken with him on you’re own camera or phone by one of his helpers.

There will be lots of entertainment on the day from DJ Tommy, Youghal Pipe Band, Bun Scoil Samba Band, The Choral Society and more…..

The lights will be officially switched on at 5pm by Santa and the winner of the colouring competition. 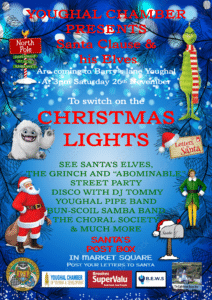