On Saturday November 20th Santa Claus arrived in style courtesy of Youghal Fire Brigade to the switching on of the Christmas Lights event. Santa and his friends Buddy the Elf and the Grinch were escorted to Market Square by Youghal Pipe Band where they were greeted and cheered by many excited boys and girls. 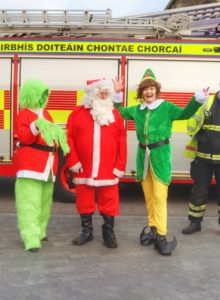 Entertainment on the day was provided by Bunscoil Mhuire Samba Band, Youghal Choral Society, Dizzy Lizzies Line Dancers and DJ Tommy.
The lights were switched on at 5.00pm by Santa and Addisson D’ardis the lucky  winner of the children’s colouring competition. 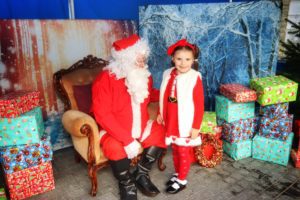 Event organisers, Youghal Chamber of Tourism and Development would like to thank all of the local businesses for their generous sponsorship and for making this Free Event possible especially Brookes Super Valu who provided Santa with Goodie bags on the day.  They would like to thank its volunteers who helped organise the Event and JJ who provided the Christmas Trees to decorate Barry’s Lane and Micheal de Buitleir who provided the safety barriers for the event. They would also like to thank the R.N.L.I. and Zofiah Hayes for helping Santa on the day.
If you would like a copy of  your Santa photo taken on the day, please contact youghaltouristoffice@gmail.com or call 024 92447 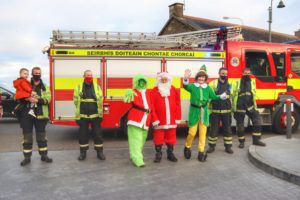 View all posts by YoughalChamber →